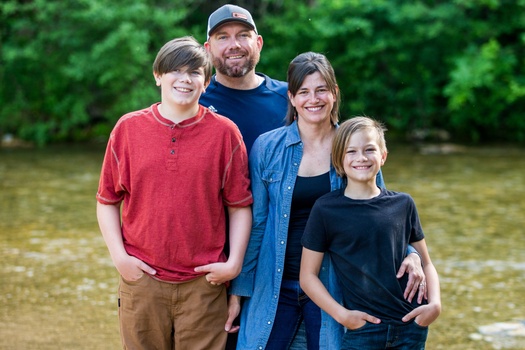 Kristen loved growing up in Spearfish. After high school, she took a gap year and attended the University of the Nations six-month program called Discipleship Training School (DTS). She spent three months in Lausanne, Switzerland, and three months traveling India. "Different but not wrong" was a principle she learned that she has carried with her. When working with people she strives to listen well and find customized solutions based on their individual situations.

She graduated from BHSU with a Bachelor of Arts in Communications and decided she wanted to travel across the United States. She spent the following summer as a tour guide for Trek America taking several vans filled with foreigners from coast to coast to tour our National Parks. This sparked a love for all things outdoors.

A year later, Kristen ended up back home in Spearfish, along with Dan. After a summer of cliff jumping at lake Pactola, she knew she had met her match. Marrying Dan has been the best adventure of her life to date. They have three boys; John, Davin, and Piers who are the reason for everything she does.

They moved to Denver not long after their wedding to pursue Dan’s career aspirations. Kristen found finance in Denver and worked her way up the corporate ladder at Jackson National, after 6 years in their insurance department she took a leap to the investment arena. As she worked with hundreds of advisors, she believed their job of working with clients day in and day out was where she wanted to be; supporting, educating, and partnering with people on their financial journey.

Kristen earned her CFP in 2017 and loves helping people plan for the adventures and projects that make life worth it, while also considering the legacy they want to leave for those they care about. She is a natural worrier, and that helps bring compassion as she becomes a partner to help think through solutions for the risks that could derail a well-laid plan.